A Visit from the Air Ambulance Charity on Valentines Day.

We are extremely pleased to have been able to donate £1,320 to the Great Western Air Ambulance Charity recently, but its a donation with a very sobering story. This valentines day, Robin Jaques, a partner at S A Partners, gave his wife a very unexpected surprise. On the mid morning of the 14th Feb, which we all know as Valentines day, he was all loved up with the adrenaline of high speed mountain biking! While out negotiating the mountain track, he managed to connect with a rather stubborn brute of a tree, and the result was not for the faint hearted. The bike was ok, the tree unmoved, but Robin was crumpled and broken with 4 ribs in tatters, a burst femoral artery, hole in his liver and collapsed lung amongst other things. So Robins wife’s present on Valentines day was a trip to the relative’s room at A & E, while he underwent emergency surgery. Not to be forgotten. 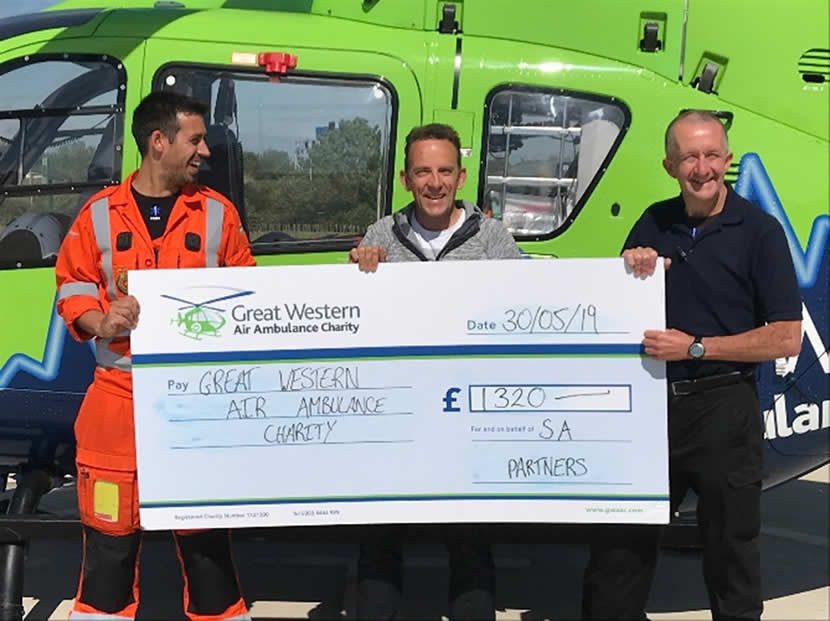 This is an interesting story, but why are we telling it? Well, due to the severity of Robins injuries sustained in the head on disagreement with a tree, Robin received the swoop and scoop service from the Bristol based Great Western Air Ambulance Charity (GWAAC) team, who provide a journey time of minutes to A & E and surgery.

What Robin didn’t realise is that the air ambulance, like all air ambulances throughout the UK, is a charity based organisation and only operates as a result of funds donated from thousands of individuals and organisations who give to it every year. There is nothing from government, NHS or the lottery.

In 2018 GWAAC attended over 1800 missions, the most common being cardiac arrests, a daily occurrence and where minutes make a huge difference to the potential for recovery, they provide an essential service. Amazingly their take off time is 4 minutes from receipt of instruction to airborne and they can be anywhere in the southwest region in 20 minutes.

Unlike paramedics and ambulances the GWAAC team carry a doctor and can perform many of the functions of an A & E department at the scene, meaning care begins earlier. Robin was unlucky to have had the accident, but extremely lucky to have been one of their customers, more so he was privileged to have spent some time with a group of dedicated, highly trained and focused professionals who went about their tasks with enormous skill, sensitivity and clarity of thought – without them his story could have ended very differently.

They require £3m per annum to operate helicopter, crews, cars and all the lifesaving equipment they carry. To that end, S A Partners has made a donation on behalf of Robin to the GWAA charity and he has enrolled as a part time speaker at events through the region to raise awareness and funds for their vital work.

If you’d like to know more about the support they provide visit https://greatwesternairambulance.com/. If you are from the area or even beyond, you can also donate to this worthwhile cause via their donation page.