Vale in Clydach, Swansea, have been awarded the coveted Shingo Silver Medallion by The Shingo Institute. The award has been dubbed the “Nobel Prize of Manufacturing” by the North-American magazine Business Week.

Vale are the first UK Company to be awarded the prize in 25 years with just one other European company being previously recognised. Simon Grogan, S A Partners MD for Europe who’s worked closely with the company, said that “it’s a fantastic reward for the hard work Vale and S A Partners, who are official Shingo Affiliates to the Shingo Inst,  have been putting in together over the last few years”.

The Clydach Refinery is one of the largest in Europe and produces high-purity nickel and sub products for specialist areas, such as car components, batteries, nickel plates and nonferrous alloys. In operation since 1902, the factory produces around 40,000 metric tons of nickel products per year and supplies around 280 clients in over 30 countries across the world (in Europe, Asia and the US).

Since S A Partners intervention, Vale have been rewarded with a revenue increase of over 4.85 million and a reduction of finished goods inventory cost by 12 million. 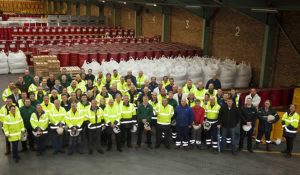 Simon Grogan said “this intervention was all about strong deployment and engagement of people through a journey that served everyone’s interest. We developed a long term vision and built robust systems that could deliver it. It was not about tools or ‘Japanese catchphrases’. Rather it focused on risk mitigation and sustainable continuous improvement.

Read the case study to find out more about the benefits Vale experienced during the improvement journey.

The name of the awards is a tribute to Dr. Shigeo Shingo, who was fundamental in the development of the Toyota Production System. The Shingo Institute recognizes excellence in organizations across the world, and its philosophy is that high-level performance in quality, cost and delivery can be reached through the application of tools for continuous improvement, and by core manufacturing techniques and business procedures.

Based on our experience of working with Vale at Clydach in Swansea, who are the first UK organisation to win the Shingo Silver Medallion in 25 years, we are pleased to announce that we will be running Discover Excellence workshops throughout the year with the first workshop having taken place at the award winning facility of Vale.

Hear what Mike Cox, Vale’s general manager, has to say about S A Partners: